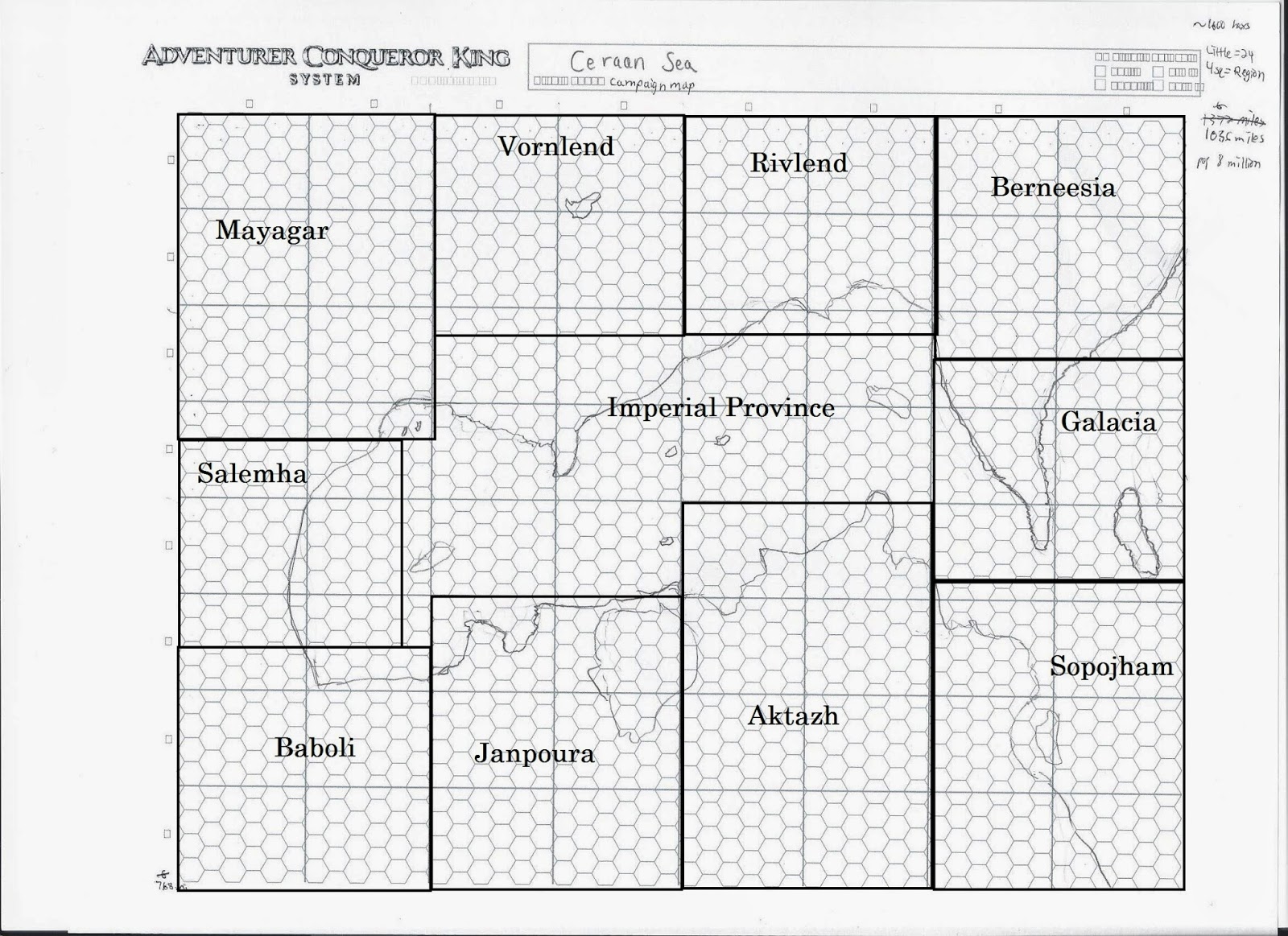 
For centuries the waters of the Ceraan Sea were home to a multitude of various cultures, religions, and races.  These civilizations were merely beacons of light in a  world of darkness, however.  The threat of Chaos loomed on the horizon every day.  Barbarians, monstrous creatures, and evil far more foul haunted the lives of the Ceraan Sea.  During these years city-states existed across the land, all vying to increase their sphere of influence.  The only true and certain thing in life was that change was inevitable.  Lands exchanged hands.  Dragons burned villages.  Life was cruel, short, and precious.

A little over five hundred years ago a sorcerer named Feltharos sparked the series of conflicts known to history as the Supremacy Wars.  For one hundred years battles were waged.  What was once a small army led by Feltharos's dark magic soon turned into legions of evil.  One by one, the city-states were defeated and subjugated.  Their fallen raised once more as undead to further support the sorcerer's army.  Some states capitulated rather than be purged, willingly joining Feltharos's armies.  Nations of Elves and Dwarves would experience civil wars over whom they should side with.  Alliances were formed to pool strength to stop the dark wizard but they all failed.

The Region of the Ceraan Sea eventually became united under the Empire of Feltharos.  The gods of the people took second importance to the worship of the God-Emperor.  Languages and currencies were standardized.  A common tongue and standard of precious metals were instituted.  The various regions of the Empire were divided into eleven Imperial Territories, governed by an Imperial Overseer.  The oppression of the Empire impacted every creature in the region.  Men and women were drafted into service for the Army and Navy.  Weapons and armor were restricted from the commonfolk.  Humanoid creatures were enslaved, their cultural identities stripped.  The elves and dwarves whom sided with Feltharos during the Supremacy Wars were given opportunities to serve the Empire and keep their homelands relatively unharmed.  Magical teachings and research became heavily controlled by the Empire, no hedge wizard would suffer the will of the God-Emperor.  Dragons and other monsters were hunted and driven back into the dark places of the world.

Feltharos built a grand dark spire on the Peninsula of Chaktau and a grand Imperial capital grew around it.  It's central position in Empire meant both the Army and Navy could project its power equally across the realm.

For all of the darkness Feltharos brought to the Ceraan Sea, he did bring a measure of Law.  Where once peoples suffered the Chaos of the darkness beyond their city walls, the strong arm of the Law of the Empire kept the other forms of darkness at bay.  For three hundred years the Empire would hold dominion over the Ceraan Sea.  Feltharos was the unifying force in land, but this was not to be for eternity.

A little over one hundred years ago, a fellowship of fifteen heroes, tired of the oppression of the Empire, staged an assault on the dark spire in the capital.  Their goal was to cut the head off of the beast so the body would fail.  It is unknown how the fellowship faired, truly.  After the assault eleven bodies of the fifteen heroes were found in the halls of the spire, fallen in battle.  What IS known, is that at the end of the conflict, the remaining four heroes and the God-Emperor Feltharos were nowhere to be found.  The servants of the dark sorcerer could no longer hear the commands of their lord in their minds.  Many magics held in place by Feltharos failed.  The spire burned and spit flames, many parts collapsing on itself.  Whatever had happened, the Empire shook.

When it became evident the God-Emperor no longer held power, the Overseers of the Imperial Territories began warring amongst each other to claim the Imperial throne.  The conflicts have been raging for over three generations now.  Many territories have collapsed back into city-states.  Others are now ruled as independent Kingdoms of the old Overseers.  Some regions have attempted to exert power over the capital in order to proclaim their leader Emperor.  Today, an Emperor named Kroknell takes residence in the abandoned spire of Feltharos, but Kroknell's power only reaches a few dozens of miles out from the city walls of the old capital.  The civilization and Law of the old Empire, for better or worse, has vanished, destroyed through constant warring and the encroachment of darker evils at the borderlands of the known world.  The monstrous humanoids break free their bonds of enslavement, now practicing their own form of slavery on any creature weaker than themselves.  Slowly, sleeping dragons wake.  Greedy and power-hungry warlords feast upon the weakened world.  Old imperial ruins fester with old relics and treasures once lost.  Your adventures await.
Posted by Steven D at 5:00 PM