Another essay about alignment

Few topics plague a Referee/DM/GM during play like alignment can.  All it takes is one pesky player with a slippery justification for his morally ambiguous act for the entire table to erupt in argument.  It may not happen often, but I've seen it enough to warrant a quickly written essay.

Having started playing RPGs with 2E D&D (as described in a previous post), most of my gaming experience has involved the nine alignments conjured from the ingredients of Good, Evil, Law (order), Chaos, and Neutrality.  For me it's always been the way things were.  3.x and PF use this alignment system as well and I'd say its the alignment system most people use these days.  The thing I liked about it was that it seemed to cover all the bases.  Evil could be lawful, seeking it's own twisted order.  It could be chaotic like a mass murdered, and so on. Now granted, neutral always seems to be the thorn in a DM's side.  "Oh no, that's not evil, I'm just doing what my character would do because I'm chaotic neutral." 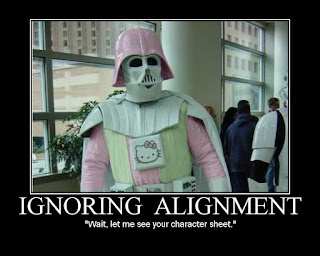 Now compare that to 0e or most OSR recreations.  Law (order) vs Chaos.  Now for me, it's easy to see how that alignment system turned into the modern one.  It certainly seems confining.  Perhaps because of the original implied setting, the world is seemingly split into forces for Law and forces for Chaos.  Further, these are essentially guidelines for Good and Evil.  Most products allude to the good guys being Lawful while the force of Chaos seek to do evil things to us.  This is a hard pill to swallow for me, coming from a more modern background.  What if the syndic of the city is bringing Order to the land by being oppressive?  That sounds like Lawful Evil but it seems hard to define to me in the scope of the old alignment system.

What's seems better in my eyes?  Well, with the way players act in the game world, I think a different approach would work better.  The single-axis of the old style seems odd but the method is sound.  What feels better, is to largely ignore alignment completely when playing.  The only real alignments that exist are 'Vaguely Good' and 'Vaguely Evil'.  There are some things, like angels and demons/devils that just seem too polarized to be too ambiguous (not counting overly zealous angels who harm blasphemers or something, etc.) so some declarations are needed for the extremes.  Otherwise, all actions or persons/things in the world are somewhere in between, to the point of not bothering to categorize it.

I think this is how I will be running my own games from here on out.  I never quite understood how an axiomatic weapon worked any way. =P
Posted by Steven D at 6:05 PM