Going along with my recent posts about sandboxes and Wilderlands, I thought now would be a good time to do a review for a product I recently got in PDF and print that I was very pleased with.  Rob Conley's Supplement VI: The Majestic Wilderlands is an example of one of those campaign settings that was born out of the original Wilderlands of High Fantasy I mentioned in last week's post. 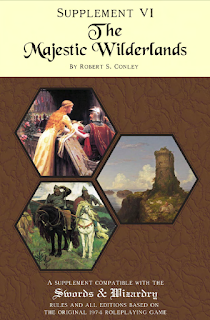 Before I get into the thick of things, I have to first admit I am not very well versed in the lore of the original Wilderlands.  So for me, it was hard to know where Bill Owen and Bob Bledsaw end and Rob Conley begins.  The piece of the name 'Supplement VI' comes from the idea that this product is a continuation of the original supplements from the original D&D ruleset.  The Majestic Wilderlands are what Rob Conley's Widlerlands campaign turned into, and within you'll find character options, spells, items, and lore.  One curious thing I found was that Rob thanks Matthew Finch for putting together the Swords & Wizardry Core Rule, but the book reads as something to be used with the 'White Box' rules. Rob has informed me this product was made with the S&W Core Rules used d6's so that explains that!  You'll see this with the references to d6 as opposed to the other types.  Any crunch of this book could easily be made read for use with S&W Core/Complete and other old school games pretty easily though.

The book first describes character options, such as new types of fighters, clerics, and magic-users.  All the new class options are interesting, however Rob makes a point to say they are NOT balanced.  This was by design, a mere reflection of 'reality'.  However, there are some obvious class choices that there is almost NO reason not to take.  The Mages of Thoth for instance, have a Magic Shield making them invulnerable to many types of spells.  You'd have to hope your players have a desire for exploring character types, because you could easily find yourself a cabal of Thoth Mages.  That said, the new class options can be used in most other campaign settings, especially the Fighting-Men options.

Next, races are covered.  Nothing major here other than a few new races, with some house-ruled modifiers.  I DID like the flavor and lore descriptions for the origin of races.  Whether this is Rob's creation or otherwise, a very cool background for the races.  Rob also has a whole section on 'Abilities' which come off a lot like skills from 3.x D&D.  Useful for transplanting those concepts into the older-style game, though I'm not sure I'd want to use them.  If I want a game dictated by skill points, I'd run my other favored rulesystem (Pathfinder).  There are some neat combat house rules included here as well.

Next up are sections on magic, which include some flavor reasoning on why magic works the way it does and some new spells.  Then you get the monster and treasure sections.  Short, sweet, and full of really neat stuff.  I really enjoy the lore for vampires and lycanthropes.  The magic items are cool too, easily transferable to another setting.

The rest of the book then covers Rob's version of the the Wilderlands.  Rather than a hex map with no filling like the original Wilderlands, this book goes into some detail of each region of the world.  Cultures, religions, and geography are discussed.  For such a short book, you get plenty of information to start running a campaign.  You can run a very varied one at that, there are 'Northlands' type regions, Middle-East/Egypt type regions, and more.  What is considered the 'main campaign' area are the regions of the famous City-State of the Invincble Overlord.  Again, enough detail is given to get the story going, but still plenty to be filled in my your own game.

Overall, I think the Majestic Wilderlands is a great book.  I read it cover to cover.  The print version comes in a size close to the LBBs and won't take much space on your bookshelf.  You can get the PDF and Print together for pretty cheap.  If you go and get the basic Wilderlands of High Fantasy maps (and even the old books with hex location descriptions) you are ready to roll for a campaign.  Even if you just had this book, it's plenty to get a world set up for your players to explore.

Verdict: Get it if you want a light-weight campaign setting book or just want some inspiration for your own homebrew world.  It's a quality book with a lot to appreciate.

I really like Rob's work.  I hope to post some reviews of his Points of Light books available from Goodman Games at some point.  They are really neat books too.