In my first post for the Swords & Wizardry Appreciation Day I covered some alternate rules you can use in your games.  You may want to take a peek if you haven't already, it's some pretty straight forward stuff on saving throws.

In any case, a lot of the bloggers today have been writing reviews of sorts of S&W.  Each discussing what is great about the game and why you should give it a shot.  I must say, though there is no need for yet another, I'm going to throw my two cents in the hat.

If the question is "Why play Swords & Wizardry?" you can imagine many different answers.  Not only because of different view points, but the fact that S&W is REALLY 3 games.  Or more, really.   More on that in a minute. So I'm going to try to answer the question for the 3 major versions: 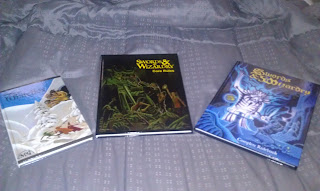 S&W Whitebox:  The Whitebox edition of the game is supposed to reflect the original 3 little books that were OD&D.  Now, some people get a little bent out of shape because of some liberties taken with the rules.  I've actually seen someone say Delving Deeper was closer in hit point progression so they preferred that (note: this isn't completely accurate from what I've seen).  Some decry the (optional) ascending AC and single saving throw, but all that aside, even the Whitebox edition of S&W can stand on it's own feet as a great game.  Call me a fan of the optional rules.

You want rules-light?  Boom.  You got it.  Want just the fighting-man, magic-user, and cleric?  You got it.  Who needs thieves?  You only need some d6's and a d20 to play this game.  The print edition is pretty small, perfect for traveling light when you are out and about.  I've often thought about having it with my on an airplane with some graph paper.

The best thing about the Whitebox is that is is the easiest to hack and manipulate.  I've seen Balrog player classes created using Whitebox rules.  You can really create whatever you want pretty easily because there are no major rule systems to break.  You can see examples of the customization with products like Crypts & Things, Hideouts & Hoodlums, Ruins & Ronin, and so many others.  Whether it's generic fantasy, or something weirder, Whitbox can handle it.  Oh, and it's free.  The PDF anyways.

S&W Core Rules: I kind of hate to say it, but the Core rules are kind of the middle kid that doesn't get as much attention.  It's more robust than it's Whitebox brother, but this is the fellow that started S&W.  Like the Whitebox it's got the OD&D feel, with the addition of the rules and fun from the Greyhawk supplement.  That means you get your thief class if you want it, and variable damage dice for weapons, etc.  It's close enough to S&W Complete to be almost indistinguishable during real play.  The PDF is free, with the print edition being about the size (length and width) as many other RPG books.  It's pretty slim and light though.  It won't break your back on the way to a friend's house.

Some of the writing is different between the Core Rule and Complete in some spots, as is the art.  But in the end what will make you choose this over Complete is that it lacks all the other "advanced" classes.  If you don't want druids or monks in your game, go with this.  If someone can help me with more differences between the two, I'd love to know.  I haven't done a full page to page comparison yet. ;)

S&W Complete: This is it.  This is the game I play.  It's the Core Rules plus things from the other supplements of OD&D.  The big difference as far as I can tell are the extra classes.  Assassin, Druid, Monk, Paladin, and Ranger.  You also get the Frog God Games art and fonts, which I'm a big fan of.  This game ends up playing as sort of a AD&D-lite game.  To me this is a great strength.  It balances the two worlds.  In fact, I was able to run White Plume Mountain, a famous 1E module with S&W Complete with no problem.  The game is flexible enough to cover gaming materials for Basic D&D too.

Though Labyrinth Lord is known as another Rosetta stone of sorts for the OSR, I'd choose S&W Complete because of the support for it!  Rappan Athuk, Monstrosities, Tome of Horrors, Razor Coast, and a host of other FGG products are available for S&W Complete.  Though they could be run with other systems, S&W carries a banner for products that is hard to beat.  I say play Swords & Wizardry Complete because you have a versatile set of rules that is easy to run, easy to find great products for, easy to hack in order to include other games' mechanics (like zero-level play), and as you might be able to tell with this event going on, a huge and awesome community.

Go do yourself a favor and grab a copy of one of these 3 versions of S&W (or all of them!) and run a game.  Play with it.  Customize it.  Run Tomb of Horrors with it.

Imagine the hell out of it!